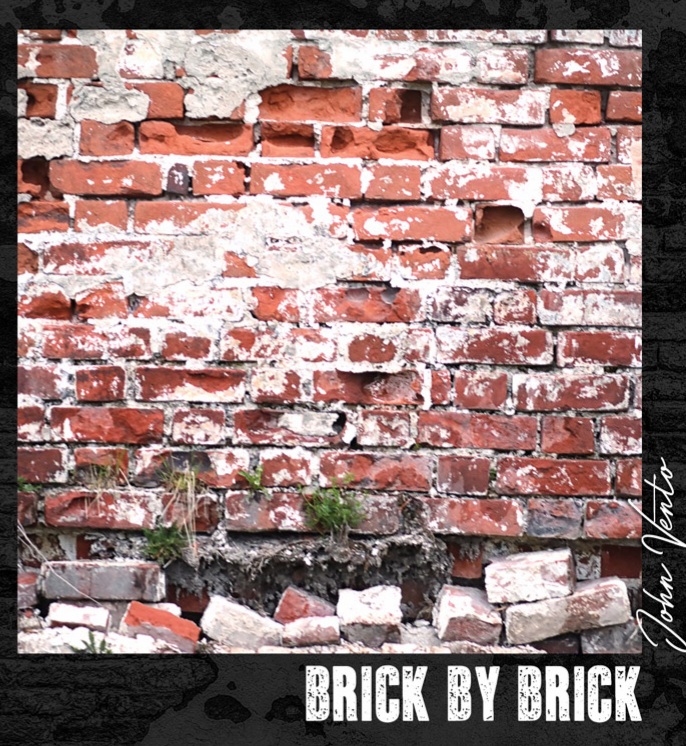 In the winter of 2018 John Vento began having serious voice struggles , and by January 2019 he could no longer sing. Too many years of poor singing technique/abuse combined with vocal chord scaring from tubes put down his throat during major surgery a few years earlier had taken it’s toll. By the summer of 2019 John was struggling to speak let alone sing. At that point he opted for multiple vocal chord medical procedures which unfortunately did not help. Throughout this period John and his wife Michele had been attending church service praying for healing. When others would also offer prayers, Michele would confidently tell them, “When John can sing again he has promised me that he will write and record a gospel song.”. Part Americana, part traditional gospel, highlighted by a soulful choir of praise voices, this track (“Let God Drive”) fulfills that promise. Though many elements of his singing voice have returned, John still has a long road ahead in training and rehabilitation to get where he wants to be. In the meantime he feels completely blessed and thankful for everyone’s prayers and support.

I was lost in the desert
In a sandstorm of lust and greed
On my knees, filled with shame
Prayed for grace
Jesus rescue me

It doesn’t happen very often, but sometimes good songs just come together in short order. This track (“New Mexico Way”) from John Vento’s “Brick By Brick” project is an example of such magic. John had a concept for an upbeat rock-n-roll tune, and of course the perfect guy to create such a thing is David Granati. David and John were on the same wave length from the jump on “New Mexico Way”. As Vento says, David and I have created a ton of music together but we’ve never had something fall into place so quickly and organically. Everything David played just sounded and felt great, capturing the exact vibe that I wanted”. Once producer, multi-instrumentalist, David Granati laid done the initial tracks, Vento pulled out some cool lyric notes from collaborator Matt Wohlfarth. “New Mexico Way” is a song about leaving your problems behind in search of a new beginning. In this song Vento sings about a specific destination (New Mexico, USA), where he searches for an old friend in hopes of finding peace and tranquility.. “Where God comes to play”.

I’ll see the sun rise at first light
Watch the moon shine late at night
As the stars, heal a broken heart

Over the past year John Vento has developed a creative friendship with author, poet, and script writer Matt Wohlfarth. Matt is a prolific writer who would share ideas with John on a regular basis. One of Matt’s poems, titled “Last Sunset” sparked the creation of this recording. As Matt says, “The inspiration for Last Sunset came on a late summer visit to the Jersey shore. Walking the empty boardwalk reminded me of summer romances that had to end as lovers returned to their real lives. “

John presented the lyrics to guitarists David Granati and Bob Zigerelli who jumped on the vibe and created a beautiful chord progression and textured guitar parts. Actually the first day of recording the demo for this track was 10/6/20. That day is important because that is when we lost Eddie Van Halen. What does that have to do with recording a song in Pittsburgh you may ask ? Well it turns out that David Granati and his brothers toured with Van Halen twice in the early eighties and remained friends to this day. David is convinced that Eddie’s spirit guided him through the creation of this guitar track. In fact the first demo guitar parts were never altered and is the performance from David and Bob that you hear on the mastered recording. Vento’s original concept for the song was to use guitars and voice only, but things progressed with piano and string parts added. Then at the very last minute the great saxophonist Kenny Blake was brought in to replace what was a guitar solo section with soprano sax.

“Not Your Kinda’ Man” was actually born almost 5 years ago when a young singer songwriter from Pittsburgh (Jessica Bitsura) was preparing to head down to Nashville to attend Belmont University School of Music. At the time Jessica was a well-known artist and performer, opening many times for John’s group (The Nied’s Hotel Band). Needless to say John and the guys in the band were big supporters of Jessica, especially since she wrote really great original songs. Right before she was leaving for Nashville, John jokingly asked Jess if she would be interested in collaborating with an “old guy” like him. Vento had some lyrical sketches and Jessica jumped on it, recording a contemporary country style demo. Unfortunately Vento couldn’t reproduce the quality or vibe in Jessica’s demo so the song was shelved for years. It might have been shelved but it was not forgotten. Vento brought the original demo to producer/ multi-instrumentalist Dave Granati who created two distinct electric versions of the song. Both recordings were killer but Vento still didn’t feel they captured the right vibe. He kept saying it had to be stripped back to the bones with an old school feel. Granati knew exactly what to do, and after many starts and stops, “ Not Your Kinda’ man, is finally ready for the world. Special note : Jessica Bitsura was awarded an Emmy for her Song “Dear Neighbor”. Written and performed as a tribute to the victims of the Tree Of Life Synagogue massacre (2018) in Pittsburgh.

NOT YOUR KINDA’ MAN

I see the storm comin’ round
It’s time for me to leave this town
My One true love takes me from you
It’s the life I live, the life I choose

I can see those tears you’ve been cryin’
While I’m under the stage lights burnin’ to shine
Things were different just yesterday
When you came and you loved everything, I sang

Once again Vento collaborated with his good friend and artist Frank Ferraro. Vento came across Frank’s lyrics quite accidently through an email exchange of some rough sketches that Frank was working on . The lyrics jumped off the page and Vento immediately asked for and received permission to use Frank’s words for a potential new song. As Ferraro said “ I wrote these lyrics using metaphors, to reflect the chaos happening all around us in the world and ask the question , are we truly aware of the not so simple times we are living in and its consequences”. Vento says, “ I wanted to record a more upbeat groove type of song for my new project ( Brick by Brick), and the line (No One Wears A Watch Anymore) was just the perfect hook for such a composition. Once I brought my ideas to guitarists David Granati and Bob Zigerelli, things came together quickly. “

NO ONE WEARS A WATCH ANYMORE

Without a doubt “Highwire” is the most personal and meaningful song that I have ever recorded. Over the past few years multiple people have come into my life that deal with debilitating diseases such as MS, Parkinson’s, and Muscular Dystrophy. Tasks that seem so mundane to many of us are a daily struggle for these folks, like trying to keep your balance on a highwire. Yet somehow they maintain their courage to forge ahead and become an inspiration to so many. This song tries to capture the perspective of someone like me, that has a close up view, yet has no idea what it is like to be in their shoes. The line, ” We both hurt but you own the pain”, says it all. I collaborated with lyricist Bert Lauble and multi-instrumentalist/producer David Granati to help me bring this song to life. We purposely created an arrangement that projects anguish, with frantic changes to reflect the emotional roller coaster of people with serious challenges. I am hopeful that we captured the authenticity of the message with both the recording and the video (Created and produced by Jim Pitulski).

It’s a long damn wait but you sit up straight
To hear the news that’s not so great
Then you close your eyes
When they say, we’ll have to see
If we can brew a remedy
Your hope just dies

A long thin line, living life
On a highwire

According to co-writer/artist Frank Ferraro, “The song was written to call out the injustices being committed by the people against its own people, by both the general population and those seated in power. It conjures up the ghosts of our past and holds them in parallel to the hurtful acts being committed today. ‘America’ is not a battle cry for more acts of destruction. It is a simple call for universal peace.”

Vento adds, ” Extremists from both political spectrums are committing horrible acts of violence. Even though these groups represent a very small fraction of our citizenry, they seem to get all of the TV and social media coverage. When, in truth, most of us are peaceful and despise such violence.

Reverends and diplomats
Blood on their swords
Rich, fat aristocrats
Above the hungry and poor
America, America
The saints come marching home
The holy ghost is on his knees
Crushed by sticks and stones

Reverends and diplomats
Blood on their swords
Rich, fat aristocrats
Above the hungry and poor
America, America
The saints come marching home
The holy ghost is knees
Crushed by sticks and stones

Reverends and diplomats
Blood on their swords
Rich, fat aristocrats
Above the hungry and poor
America, America
The saints come marching home
The holy ghost is on his knees
Crushed by sticks and stones

Reverends and diplomats
Blood on their swords
Rich, fat aristocrats
Above the hungry and poor